skip to main | skip to sidebar

Can you imagine three established American artists joining the Republican Party and then legally changing their names to George Bush a few years ago? And bringing the US President’s name (or that of any other head of state) to museums, festivals, galleries, theaters…

The NAME Readymade shift has been conceived as a presentation of the “name changing” act performed by three Slovenian artists who, in 2007, with all the required paperwork and stamps, officially took the name of Slovenia’s then Prime Minister, the conservative economic liberal Janez Janša.

“When the three artists changed their names to Janez Janša, they, in fact, took a critical stand towards the state. Towards the Slovenian government, in which, until recently, all positions seemed to be held by a single person – Janez Janša. (…) Through the multiplication of Janez Janša’s name, the primeministerial function assumed, in this specific artistic action, a role similar to that of the Campbell Soup cans in Andy Warhol’s works.” (Zdenka Badovinac, Name Readymade, October 2008) 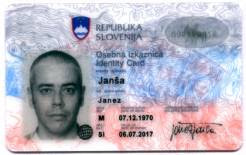 All Janez Janšas’ work, their private and public affairs – in a word, their whole life – has been conducted under this name ever since.

“(…) the gesture is – from now on – in constant process: it will be semiotized in connection with their every new work of art and public appearance; therefore it will take some turns unprecedented in other known forms of subversive affirmation.” (Rok Vevar, Večer, September 1st 2007) 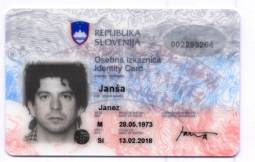 Janez Janša, Janez Janša and Janez Janša will take you through a series of artistic, political, administrative and mediatic actions they have performed, with a particular focus on their latest solo exhibition entitled NAME Readymade.

Works exhibited in this show (valid ID cards, passports, credit and bank cards, driving licenses, birth and marriage certificates etc.) have been generated by reality itself. Art history has no record of similar readymades. Personal documents such as identification cards, passports, health insurance cards, credit cards and the like cannot “simply” be bought in shops, recontextualized, turned around, exhibited and produced as readymades. To obtain them, one needs to initiate an administrative process.

“The use of personal documents as exhibition items is certainly a liminal case; it probes certain boundaries. It is liminal in that it is not clear whether or not such a use of personal documents respects the rights that you acquired when you were issued these documents. You cannot burn documents as this is a criminal offence, but what about the use of documents for artistic purposes? To be sure, this is not something that serious people would use to justify persecution in the name of the state; yet, this does mean that everybody knows that you do not have your documents on you, that is, that you are not using them in compliance with the conditions under which they have been issued to you. Even a bank can cancel your cards if they find out that you are using them in an inappropriate way. You are walking a line that I would not go as far as to call “dangerous”, but I do, however, consider it suspicious. This is precisely part of the risk that I mentioned before. This can give rise to a number of possible developments. After all, you have to make a special effort to find out how security is going work at the exhibition. It is an entirely different thing if you exhibit graphics numbered 1 to 100 that are insured through an insurance company. I doubt that any insurance company would issue an insurance policy for the everyday functional value of the exhibited documents in the same way as they would issue tourist insurance – such insurance would entail the issuance of new documents. Furthermore, it is also interesting that these documents are art works, readymades. The original “Fountain” had been lost, nicked, so Duchamp made new ones and signed them anew; he even made a miniature version for his little suitcase; you, however, cannot make new documents, they can only be made by an authorized organization called the state and its Ministry of Interior. Yet the Ministry itself cannot function illegally and, for example, reproduce these documents as art works. Now what? These are works of art only insofar as they are also authentic documents. Here we reach a contradiction – the very contradiction of the world of art. A readymade as a work of art is something inauthentic; it is the very proof of inauthenticity: with a readymade, the “aura” disappears. In your case, however, the precondition for this readymade is its authenticity in everyday life – its credibility and authenticity. If somebody bought this work of art, they would be buying it as an authentic piece, together with its functional ‘readymade’ value.” (Lev Kreft, Name as Readymade, An interview with Janez Janša, Janez Janša and Janez Janša, NAME Readymade, October 2008)

Janez Janša, Janez Janša and Janez Janša have cut right into the midst of their own realities and the reality of the space and time in which they work. For this purpose they have used procedures typical for art – transformation, translation, representation and mimicry. They have upturned the classic relational scheme between art and life as developed in the 20th century. In the previous century, art was redefined by way of reality entering into artistic contexts without mediation (Badiou could therefore define the 20th century as a “passion for the real”), while Janša, Janša and Janša want to achieve the opposite; by consequence, their methods cut deeply into their material lives and affect the life of their immediate surroundings.

Supported by the Ministry of Culture of the Republic of Slovenia and the Municipality of Ljubljana.

MORE ABOUT THE PROJECT:


BIOGRAPHY OF THE LECTURER

Janez Janša (b. 1970, Bergamo, Italy) is a conceptual artist, performer, and producer who graduated from the Academy of Fine Arts of Milan, Italy. His work has strong social connotations and is characterized by an intermedia approach. He is co-founder and director of Aksioma, Institute for Contemporary Art in Ljubljana. His first public artistic project was the urban installation I Need Money to Be an Artist, which was presented first in Ljubljana, Slovenia (1996) and then in Venice, Italy (1997). In 2001, he established (with I. Štromajer) Problemarket.com – the Problem Stock Exchange, a virtual platform on which shares of companies dealing with problems are floated. The following year, Janša produced machinaZOIS, an electro-mechanical patron that financially supports contemporary artists and artistic productions. He then started development of DemoKino – Virtual Biopolitical Agora, a virtual parliament that, through topical filmic parables, provides the voters with the opportunity to decide on issues that are becoming the essence of modern politics – the questions of life. In 2005, Janša established the platform RE:akt!, which examines the media’s role in manipulating perceptions and creating (post)modern historical myths and contemporary mythology. A part of this platform is the project Mount Triglav on Mount Triglav by Janez Janša, Janez Janša, and Janez Janša. Parallel to these socio-political projects, Janša investigated the field of virtual reality and neurofeedback technologies, and from 2000 to 2002, he developed and performed (with Darij Kreuh) Brainscore – Incorporeal Communication, a performance for two operators acting in a virtual reality environment through their avatars. Between 2004 and 2007, he lead the project Brainloop, an interactive performance platform that allows the subject to navigate a virtual space merely by imagining specific motor commands. Janez Janša is also co-editor (with Ivana Ivkovic) of the textual and pictorial reader DemoKino – Virtual Biopolitical Agora, published by Maska and Aksioma in 2005. 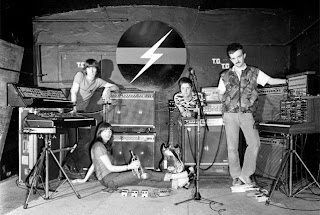 SAALIPLAANID / PLANS OF THE SPACES